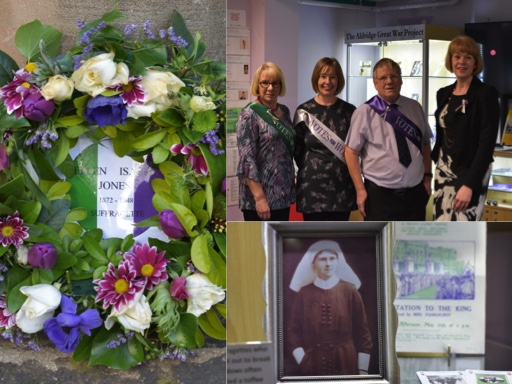 I was delighted as part of the celebration of 100 years since women’s suffrage Sue Satterthwaite and Len Boulton our magnificent local historians put on an exhibition at the Aldridge Library to celebrate the remarkable life of the ‘Aldridge Suffragette’. It was lovely to meet Sue and Karen and learn a little more about how Ellen ‘Nell’ Cotton played her part in the Suffragette Movement.

Miss Ellen Isabel Cotton “Nell” was born in 1872 and qualified as a nurse in Birmingham. She married Dr Ernest Jones of Aldridge. They lived together at Walmer House where they had 4 sons and Dr Jones became the local Village doctor. Nell and her husband were supporters of the ‘Vote for Women’ movement and carried out many talks in the village on the subject. Dr Jones supported his wife’s connection to Emmeline Pankhurst and when she received a letter detailing that there was a march on Buckingham Palace, May 1914, Nell was encouraged by her husband to attend.

Nell was arrested on Governor Street for damaging the windows of Government buildings. She was sent to Holloway Prison and for 5 days undertook a hunger strike. Nell was not force fed however, she was released as part of the “Cat and Mouse” legislation which sent women on Hunger Strike into respite before continuing their sentence in prison.

Nell, with some other women, fled and returned to Aldridge as a fugitive. Two months later the Great War broke out and Dr Jones opened up the Manor House to care for military personnel, where he and his wife cared for soldiers from the UK and Europe. They received acknowledgments for their hard work and service from the Treasury even though Nell officially remained a ‘fugitive’.